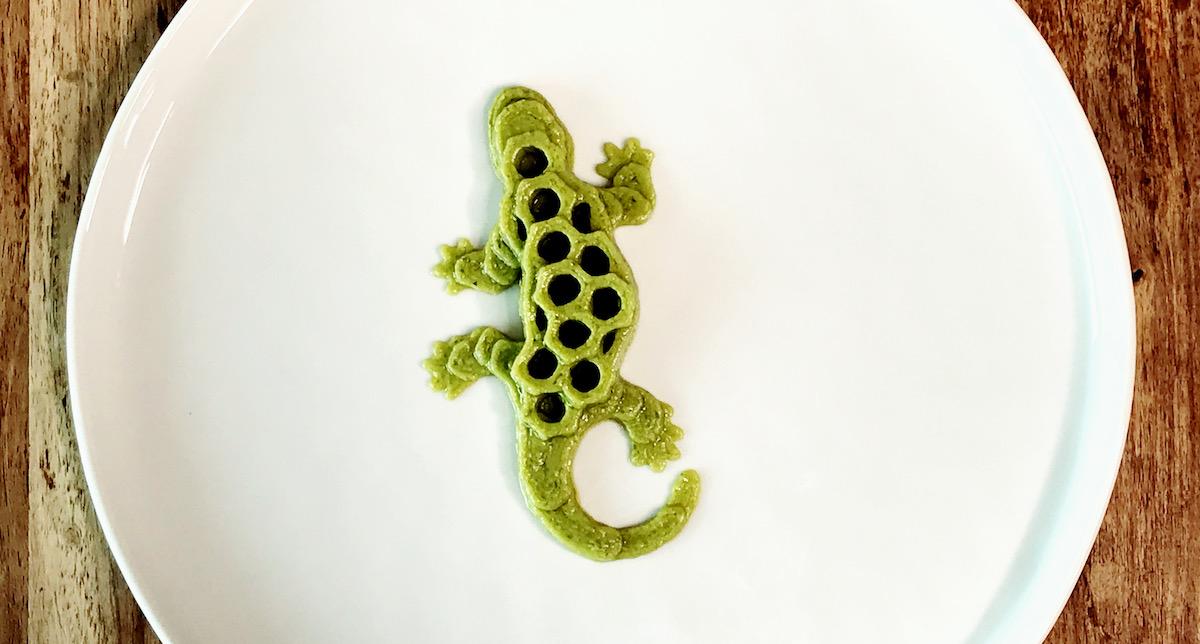 Guacamole is generally thought of as a healthy food. Definitely healthier than a LOT of other things that kids eat.

My son wouldn’t touch guacamole until he was 10 years old. I tried all sorts of strategies to get him to try it, as I do with any healthy food he hasn’t tried yet. Pointing out that his favorite color is green, so he should try green guacamole... etc.

Eventually he tried guacamole, and now he happily eats it! So… what was the trick? Simple: we printed it with Foodini in the shape of a salamander.

My son had a friend over one day and his friend wanted to see Foodini in action. After scrolling through different print options, the boys decided on printing a salamander. I chose the ingredient… guacamole. :-)

I put the resulting print on the table with some tortilla chips, and both grabbed a chip and went straight to trying the guacamole. (Side note: they did have fun deciding what part of the salamander they would dip into first.)

Result? I think the ensuing empty plate after 1 minute says everything. (Hungry boys!)

But here’s the thing… it only took that one time for my son to try guacamole, and realize he likes it. About a week later we had guacamole and chips again, but this time it was a regular bowl of guacamole, no printed guacamole salamanders in sight.

My son went straight for a chip and then immediately went to dip it in the guacamole without any prompting, and happily ate it. Then went for more.

All it took was an engaging visual presentation to encourage him to try the guacamole, then he understood that the guacamole tasted the same, no matter which shape it was in. He said he still likes the printed guacamole salamander, so of course we still print it, but the guacamole doesn’t have to be printed all the time for him to choose eating it.

Even now when he dips into a regular bowl of guacamole, he’ll sometimes bring up the story recalling how we needed to print the salamander for him to even try guacamole in the first place. And then he laughs. :-)

I consider that a parenting win! If he chooses guacamole as a snack versus the many not-so-healthy choices he could’ve made, then I’m happy. Bonus points if we also printed our own tortilla chips which are MUCH healthier versus packaged ones.

Side note: yes, when my son first tried the guacamole salamander, a friend was trying it too which can indeed influence my son trying it, but this isn’t always the case. His friends have tried foods in front of him before where my son has declined a taste. Did the friend help push my son in trying a new food? It could have. But I believe the creative 3D print presentation of the guacamole was just the trick.

Your message has been sent successfully.
Thanks for contacting us!

Indicate the 5 capsule sizes you want:

Register your details to complete your order.

There is just one more step in order to complete your registration: please check your email and click the link in the email we sent you. It should arrive momentarily. Don’t see it? Be sure to check your spam folder, just in case it got delivered there by accident.

Please check if your email address and password are correct

Email Opt In (or Out)

Something is wrong with the address

Please double check the address, there appears to be something wrong. There could be a problem with one or more of the following: Address, City, State, ZIP/postcode.

FOODINI CAN BE PURCHASED ONLINE FOR THE FOLLOWING COUNTRIES

Don't see your country and you want a Foodini? Contact us.

Foodini - inclusive of one accessory box - ships for FREE to European Union countries, the United States, and Hong Kong. All other countries may incur a shipping charge that will be shown prior to completing your purchase. Free shipping does not apply to additional accessories purchased, which ships separately and incurs a shipping charge.